Home / Uncategorized / Sima, survived the Holocaust, but not everyone in her family did…

Recently our granddaughter Eliana had her Bat Mitzvah. Eliana shared with all present about a Jewish girl living in another age. It was a gloomy age, reminding us to never forget the suffering of the Jewish people in the Holocaust.

Eliana shared the story of Sima a Holocaust Survivor. Her 2 sisters Neena and Berta that were murdered by the Nazis and never had the joy and opportunity to be Bat Mitzvahed. Sima was the oldest in this Jewish family living in pre-World War II Belarus (White Russia).

Nina (the middle sister), finished 3rd grade right before WWII started. She was a middle child and an excellent student. Nina was very active and enjoyed outdoor activities more than playing with dolls. The family lived in the small town of Uzda. They stayed on a farm with chickens, geese, a cow, and of course a vegetable garden. The two oldest children – Sima and Nina had to help their parents take care of the farm. Berta would stay home as she was only 5 years old.

WWII started and the Nazis were invading their small town. No one understood, but it was obvious they were targeting Jewish people and killing them, young and old, it didn’t matter. Fearing for their lives, Sima with her 2 sisters and their mom, went to Minsk by foot. They left their home and possessions behind. They walked 70 kilometers in terror to the capital city of Minsk.

There were many people fleeing to Minsk. During the escape and rush, Sima and her sisters got lost and couldn’t find their mother in the chaos and crowds. Everyone was going to Minsk so they thought it was safe (information traveled very slowly at the time). Upon arriving in Minsk they were captured and taken to the Jewish ghetto. After some time were reconnected with their mom.

The Minsk ghetto was one of the largest in the former Soviet Union and also one of the most horrific. People were starving, there was little food and the tiny apartments were not heated in the winter. Sometimes up to 10 people would sleep in a room suitable for 2. In order to keep warm during the cold Russian winters, the family would burn their furniture, books, and anything they could find to keep warm near a fire. When the village was invaded, Nina’s father along with other men villagers joined the partisans to try and fight the Nazi army.

Nina would take care of little Berta often, as they would stay home while Sima and her mom would work to find food. One day, Sima went to work outside of the ghetto with her aunt. Her mom stayed with her sisters, not going to work because Berta was sick. That day, July 28th, 1942, a year after the start of the war in Belarus, soldiers came into the ghetto. They starting shooting men, women, and children, a pogrom. It was a way the Nazis would “clean out the ghetto”. Nina, Berta and their mom were murdered for no reason but for being Jewish that day in the Minsk ghetto. Sima was devastated, and had no choice but to find a way to survive.

Sima continued to work outside of the ghetto until 1943. One day while wandering outside of the ghetto a non-Jewish woman from the city took her in and told her not to tell anyone she was Jewish. She brought her back to her village and took care of her until the end of the war. Sadly, her aunt was also killed in the ghetto during that time. Sima survived, thanks to the kindness of one woman who was brave enough to do the right thing during a terrible time in history.

At the end of the war, Sima did not know if her father survived. One day after the war, while watching a parade of partisans Sima came face to face with her father. They were reunited.

Thankfully, Sima is with us and we have become friends with her, along with many other Holocaust Survivors. We serve Sima, honor her and her lost family members. God brings her comfort through our staff and volunteers that work in our Comfort for Holocaust Survivors Ministry in Belarus.

May We Never Forget… 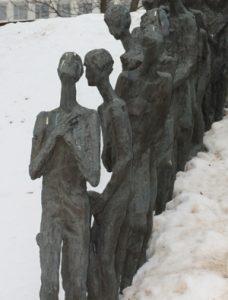 It would be a great blessing for you and the survivors who are still living. We want to help facilitate this remembrance for you. Survivors we serve are overjoyed to share pictures and their stories of relatives who died as children. We want them to be remembered and honored at a Bar/Bat Mitzvah.

Do you have an interest in dedicating a Bar/Bat Mitzvah in remembrance of a child who was killed during the Holocaust? Please send us an email. We will provide you with information of a child, their family, and their story.

“Where is God in this crisis?” – Your Jewish Connection… with Rabbi Stewart” (Duration: 25 minutes)

Your Jewish Connection – Catch up on watching or listening to Rabbi’s Stewart’s teachings!

Holocaust Survivor, Larisa, shares words of thanks for RII’s continued support.
Holocaust Survivors often feel lonely and forgotten.
Here they share from their hearts how together with you we are bringing them hope and joy.
Rabbi Stewart Winograd shares words of encouragement for you during the Coronavirus epidemic.
Orphans, hurting children, the elderly and impoverished families are being helped and loved on in the name of Yeshua through our Project 58 Initiatives.

Message from our Founders Our Mission Contact Us Blog Donate

Reaching Out Project 58 Generation Next